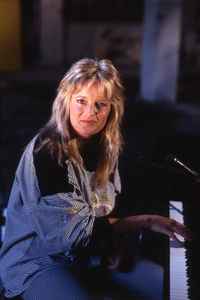 Started her career as folk musician in 1969 and was in Tears from 1971 to 1976 with then husband Holger Laumann. Released her debut album Sweet Thing in 1973, and founded all-female band Shit & Chanel in 1973 with a.o. Lis Sørensen, with whom she also sang backing vocals for a.o Gasolin'. After Shit & Chanel dissolved in 1979, she founded Anne Linnet Band with Lis Sørensen and Sanne Salomonsen. In 1983, she founded the new wave band Marquis De Sade (7), that released three albums and broke up in 1988, but reunited in 2002 for the album Over Mig Under Mig. In 1997, she founded her second all-female band Bitch Boys (4). Linnet has released two popular albums with lyrics by the Danish writer Tove Ditlevsen, Kvindesind and Barndommens Gade, as well as three albums for Danish musicals, Roserne Bryder Ud (Musical Af Anne Linnet Og Erik Knudsen), Linnet • Salomonsen, and Krig Og Kærlighed.

Student at Århus Statsgymnasium in 1972 and educated at the Royal Academy of Music, Aarhus from 1973 to 1985. In her relationship and subsequent marriage in 1974 with Holger Laumann, she had the daughter Evamaria Linnet in 1973 and the son Marcus Linnet in 1977. Linnet's memoir "Testamentet" (2012) describes multiple homosexual relationships, and her bisexuality is reflected in some of her songs, for example "Smuk Og Dejlig" from Shit & Chanel - Shit & Chanel. Her father died in 1979, which had a big impact on subsequent releases, such as Anne Linnet - Marquis De Sade and Anne Linnet - Barndommens Gade. She was divorced in 1985 and in a second marriage with male model Mads Buhl Nielsen, she had son and later solo artist Xander Linnet in 1988. In a registered partnership with 34 years younger woman Tessa Franck since 2010 and divorced in 2013. Met 38 years younger woman Kathrine Kjær in 2017 and married her in 2019.
Sites:
denstoredanske.lex.dk, kvinfo.dk, Wikipedia, Facebook, alt.dk, seoghoer.dk
In Groups:
Anne Linnet Band, Bitch Boys (4), Marquis De Sade (7), Shit & Chanel, Tears
Variations:
Viewing All | Anne Linnet
A Linnet, A. Linnet, A.Linnet, Anne, Anne Linet, Anne Linned, Linnet