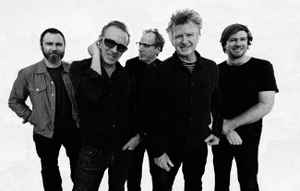 Mark Hart who had toured with the group joined as a permanent member in 1993. Founding drummer Hester left in the band in May 1994 citing family reasons. He briefly returned for their "Farewell to the World" concerts in Melbourne and Sydney in 1996 and also played on three new tracks recorded for the album "Recurring Dream" (1996). His replacement was Peter Jones who remained with the group until they disbanded in 1996.

In November 2016 they were inducted into the ARIA (Australian Recording Industry Association) Hall of Fame.

On 9 December 2019, Neil Finn unveiled via his official web site that the band's new line-up - alongside himself and Seymour - would add Mitchell Froom, Liam Finn and Elroy Finn. As a result, Mark Hart and Matt Sherrod would no longer participate.

November 5, 2018
When I first heard " Locked Out " I seriously thought it was a long lost Lennon song, and that is in no way being critical

July 30, 2018
I myself am partial to Something So Strong, a tune with one of the best rhythm guitar intros.