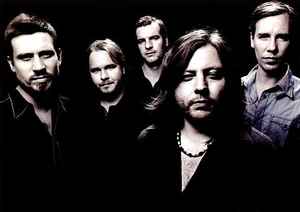 In 1998 Dahl quit the band and was replaced by guitarist Sebastian Sandstrøm. Additionally it was expanded by keyboard player Jess Jensen.

In 2000 the band moved to the Danish capital Copenhagen, where they began writing and rehearsing new songs in their own studio.

In June 2001 Saybia got a record deal with EMI and released the self-titled 6-tracks EP Saybia. Songs like "Fools Corner" and "The Day After Tomorrow" got massive airplay on Danish national radio channel DR P3.

On 13 September 2004 Saybia released their second album These Are The Days. Like the debut album it went straight to no. 1 on the Danish album charts. After the release, the band embarked on an intensive 6 month tour of Europe. The tour was successful and all venues in the Netherlands were sold out, including the gig at Paradiso Amsterdam.

The band's third album Eyes On The Highway was released on 27 August 2007. Contrary to the two previous albums, it received lukewarm reviews in the press, including 3 stars out of 6 from the leading Danish music magazine Gaffa. It also fared less well on the Danish album charts but reached top 20 in the Netherlands, Norway and Switzerland.

In 2008 Saybia went on hiatus and vocalist Søren Huss embarked on a solo career. After a few concerts in 2010, they reformed in 2014 to record their fourth album No Sound From The Outside, released on 2 October 2015. During the recording sessions, guitarist Sebastian Sandstrøm left the band and was replaced by Kasper Rasmussen. The album was followed by a European tour, before Huss returned to his solo career.
Sites:
saybia.dk, Wikipedia
Members:
Jeppe Langebek Knudsen, Jess Jensen, Kasper Rasmussen, Palle Sørensen, Sebastian Sandstrøm, Søren Huss, Thomas Dahl (4)