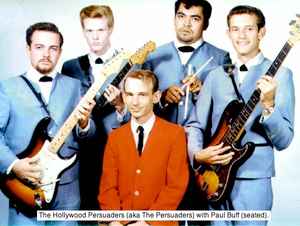 Profile:
The Persuaders were really one key figure. That of Paul Buff, whose engineering skills had led him to build PAL Studio in Cucamonga, initially at 8020 Archibald Avenue and then at 8040 - where it eventually became Frank Zappa's 'Studio Z' in 1964. Buff offered flat-rate fee tariffs to up-and-coming bands who needed cost-effective recordings. He engineered a number of surf bands (despite being in the desert location) and his work launched The Surfaris and The Chantays, but he benefited no more than they by some devious re-recording of the works.

As Zappa (who had lived nearby with his first wife) began to occupy the studio, a number of other musicians began to regularly appear. Dave Aerni, Ronnie Williams and various personnel from Zappa's early groups. Buff created a number of 'labels' and pressed limited quantities of projects on them. A few San Bernardino stores would carry them and Buff then got local DJs to air-play them. When the radio station did their weekly sales-check with the stores they would discover stock had almost gone. That's because the studio team had anonymously purchased them all - and the station would chart the disc, at least into the top forty. Buff & co would then go to Hollywood and 'persuade' A&R music men to advance them large sums for national release of the 'hit'. Hence "The Hollywood Persuaders".