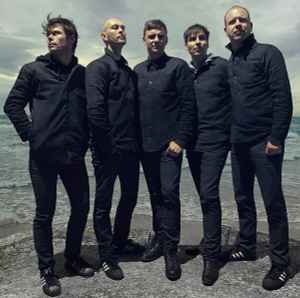 Profile:
Danish rock band founded 1996, went to be among the leading bands on the Danish scene in the 00s. Had a major breakthrough 2004 with the "USADSB" album. The music is keyboard oriented rock influenced by late Depeche Mode.
Nephew has remixed "The Way I Are" by Timbaland and "Allein Allein" by Polarkreis 18 with samples from their own music.

Nephew's sound is inspired by Depeche Mode but with a heavier rock sound although they still are very electronic. The Danish lyrics are sung by Simon Kvamm (who also is had great success with the comedy show Drengene fra Angora).
There was even made an excellent bastard-pop (mash-up) of one of their songs "Superliga" and a Depeche Mode's "Personal Jesus" that was played a lot on Danish Radio P3 (It was later revealed that it was made by one of Nephew's band members).