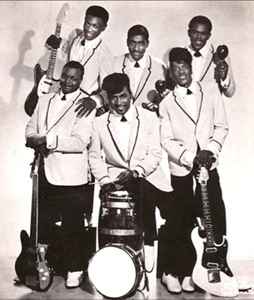 Profile:
This hard-hitting soul group formed in Rochester, NY, consisting of the multi-talented Willie John Ellison, along with Lester Freeman, Vonell Benjamin, and Charles, Moses, Sam, and Harry Armstrong. (That's seven, but one of the Armstrong brothers' bounced early.) Joe Beard was also a founding member on bass and vocals, so that's eight! They debuted with "Stop Hurting Me" on Fine Records (1965) and another on Lyndell Records (1966) typo-credited to the Sold Brothers Six. A Philly DJ introduced them to Jerry Wexler of Atlantic Records, and they had a small hit with "Some Kinda Wonderful" (written by Ellison) in 1967; it was their most successful record, making it into the Top 100 at number 91. The Fantastic Johnny C took it four slots higher the following year; and Grand Funk Railroad outdid 'em all by rocking it to number three pop in 1974.

John Ellison, a coalminer's son, grew up in West Virginia. He learned to play guitar and wrote his first songs when he was 13, later moving to New York City and then Rochester. Soul Brothers Six cut two records on two tiny labels before inking with Atlantic on the strength of Ellison's "Some Kinda Wonderful." But sales of follow-ups -- "You Better Check Yourself," "Your Love Is Such a Wonderful Love," "Thank You Baby for Loving Me," and "Drive" -- were embarrassing and Atlantic dropped the group before the end of the decade.

Around this time, Joe Johnson, James Johnson, Charles Pevy, and Eddie Reno replaced the Armstrong Brothers, who left disgusted and soured by the Atlantic ordeal. This new lineup waxed three singles on Phil La of Soul from 1972 to 1974: "Funky, Funky Way of Making Love," "You're My World," and "Let Me Do What We Ain't Doin'." None hit nationally but they worked steadily throughout the country anyway. A substantial royalty check from Grand Funk Railroad's rendition of "Some Kinda Wonderful" revitalized Ellison's songwriting juices. He secured a deal with a small label in Rochester, and scored a Carolinas beach hit that did some business in Europe as well.