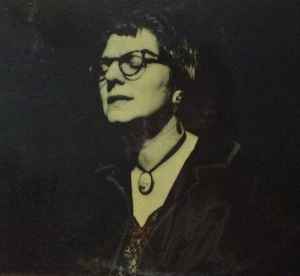 Real Name:
Rifkele Royzenblatt
Profile:
Ruth Rubin devoted a lifetime to the collection and preservation of Yiddish folklore in poetics and songs. Her writings include books, articles and music collections. As a popular performer-folklorist, she would describe the background of her selections and then sing them in a simple, unaccompanied style.

Born in Montreal on September 1, 1906, to immigrants from Bessarabia, she grew up in a Canadian multilingual household of books and music. Her father died when she was five years old. Young Ruth attended afternoon classes at the Jewish secular Peretz Shule, where she sang and where her interest in Yiddish literature was sparked by a visit from Shalom Aleichem in 1915. In the early 1920s, she went to New York City, where she worked as a secretary and wrote Yiddish poetry, a collection of which was published by the end of that decade. In 1932, she married Sam Rubin and in 1937 their son Michael was born. Meanwhile, she embarked upon Yiddish folklore studies and taught literature and music at several Yiddish schools. During World War II Rubin translated and had published Yiddish diaries that had been smuggled out of the ghettos and concentration camps of Europe.

The Holocaust defined Rubin’s mission to collect, document and perform the Jewish legacy of Eastern European folk song. She became an active member of the American Folklore Society, the Canadian Folk Music Society and the International Folk Music Society and served on the editorial board of the New York Folklore Quarterly. She participated in programs with other folk song performers at many concerts, including Carnegie Hall performances. In 1945 she began to make recordings for Folkways Records and then became a busy lecturer-performer for religious organizations and educational institutions. In 1959 her son died tragically, and Ruth Rubin’s world stood still for a while.

In the 1970s, following the death of her husband, Ruth Rubin reemerged and resumed her mission on behalf of Yiddish folk songs. For use in her entertaining lectures and in her many published articles in Yiddish and English periodicals, she shaped sensitive translations into English so as to make those materials more accessible to a wider public. Her book Voices of a People: The Story of Yiddish Folksong (New York, 1963; republished in 2000 by University of Illinois Press) explored the historical background and ethnic meaning of the song texts, treating them as important literary materials. Her song collections A Treasury of Jewish Folksong, in Yiddish and Hebrew (New York, 1950) and Jewish Folk Songs, in Yiddish and English (New York, 1965) also included valuable discussions of the origins of the lyrics and melodies. She received her Ph.D. in 1976 for her dissertation on the songs of Jewish women. A 1983 grant from the National Endowment for the Humanities and another from the Memorial Foundation for Jewish Culture enabled her to complete the organization of her extensive field collections. Her materials have been placed in various libraries: the AMLI (Americans for Libraries in Israel) in Tel Aviv, the Library of Congress in Washington, D.C., the Canadian Museum of Civilization in Ottawa and the YIVO Institute for Jewish Research in New York City. She also opened an archive, which bears her name, in Haifa.

Over the course of her fifty-year career, Rubin collected about 2,000 songs, toting a bulky reel-to-reel tape recorder across the United States and Canada. She died in a nursing home in Mamaroneck, New York, on Sunday, June 10, 2000, at the age of ninety-three. The New York Times obituary described her work as an important cornerstone in the current Yiddish revivalist movement.
Variations:
Viewing All | Ruth Rubin
R.Rubin