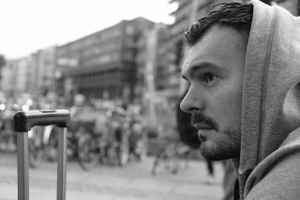 Profile:
Berlin, Detroit, Birmingham and, of course, Sarajevo.
Bosnian-built and -bred Sev Dah may be a Swedish expat, but the Balkan blackness clings strongly to the bleak percussions and rigidly uneasy synthetics that unwillingly fuse into his strongly individual take on techno. Authentically purveying the pulsations of the nakedly throbbing and ugly world, far away from Starbucks and H&M.

Signed to respected labels such as Komisch, Random Island and Frozen Border sublabel Naked Index and most recently his own label Proletarijat he quickly gnawed his way into the scene’s core of DJs and producers. Like a rabid mongrel, since 1998 he has been chewing and belching new bastard beats that are aching to scream out. Consequently there’s a steaming and steady stream of vinyl releases coming.

With influences ranging from Stigmata and Mills to Master Reese and Petar Dundov, Sev Dah is a versatile but headstrong DJ that can gently ease a thumb in at midnight or fervently thrust it down the hatch at peak time.