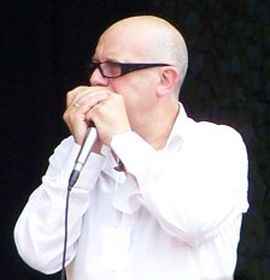 Real Name:
Mark Feltham
Profile:
Mark started playing at the age of 6 but only really seriously became interested in the harmonica in his late teens. His first musical break came when he was approached by Dennis Greaves to form Nine Below Zero in 1977. After 5 happy years the band dissolved in 1982 and Mark went into session work he then became a permanent member of the Rory Gallagher band. This lasted until 1991 when the decision was made to get Nine Below Zero back together using the talents of Gerry McAvoy and Brendan Oneill on Bass & Drums both from Rory's band. This format lasted for 1 year Mark then decided to go back into session work and come off the road for a while. He was then enlisted back into the Rory fold where he stayed until Rory's untimely death in 1995.
Sites:
Wikipedia
In Groups:
NHS Voices, Nine Below Zero, The Co-Operative, The Robbie McIntosh Band, The Yardbirds
Variations:
Viewing All | Mark Feltham
Feltham, Marc Feltham, Mark "The Harp" Feltham, Mark 'The Harp' Feltham, Mark (The Harp) Feltham, Mark Feltenham, Mark Feltman, Mark L. Feltham, Michael Feltham