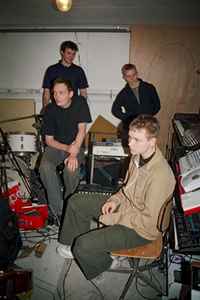 Profile:
Limp was a unit consisting of Jonas Munk, Jakob Skøtt, Jess Kahr and Rasmus Rasmussen, and formed the basis of the styles and sounds they would later explore through our various soloprojects: Manual, Syntaks and Aerosol.

Their aim was to create a kind of post-rock that also borrowed sounds and ideas from 1980s rock (über-romantic, U2-sized peaks) and dream-pop (a healthy dose of chorus and reverb) as well as the detailed programming of electronica that seemed so interesting back then (this was around 2000-2002).