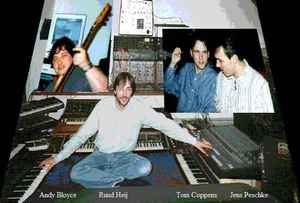 Profile:
Kubusschnitt was formed in 1999 on the base of wEirD by musicians of that group Andy Bloyce and Jens Peschke adding Ruud Heij and Tom Coppens. It might be interesting to mention that all original musicians are from different EU countries: UK, Germany, Netherlands and Denmark (by above order). They've made three groundbreaking monumental works together: The Case (1999), The Cube ‎(2000) and The Singularity (2001). In May 2000 Kubusschnitt performed live at Jodrell Bank Planetarium together with AirSculpture. After release of The Singularity in 2001 Jens Peschke left to continue work with Navigator (2). The rest of band performed live at 9th Alfa Centauri Festival (March 16, 2002), aided by Marcel Engels of Free System Projekt, and Krautrock Karnival at The Phoenix Theatre in Exeter (June 7, 2002). After these dates Ruud Heij left to join Free System Projekt. Kubusschnitt reduced to a duo performed final live at National Space Centre in Leicester (May 31, 2003). In 2006 they released 3 digital albums based on these performances and rehearsal sessions. Kubient is completely new work performed in Utrecht during rehearsals for Alfa Centauri. Phoenix is based on Exeter performance with a pair of bonuses. Nightshade is almost complete recording of live at NSC. Journey Through A Burning Cube was released as a special compilation of several edits from the three above, including one new track from the mentioned Utrecht session. These were the final events of that line-up. In 2010 Ruud Heij decided to reform Kubusschnitt as a part of his ongoing duo with Gert Emmens. They were joined by original member Tom Coppens. Jan Dieterich was included for guitar duties at place of Andy Bloyce. They released another great work Entropy's Evolution in 2010. So far there's no continuation to this line-up. Around 2018 Andy Bloyce together with Tom Coppens started the activity to restore as much as possible the archive recordings of original Kubusschnitt and officially released almost every track that was in circulation as bootlegs among fans. They continue the restoration and will discuss a possible reformation for new recordings.
Sites:
kubusschnitt.wordpress.com, Bandcamp
Aliases:
Penterakt, wEirD
Members:
Andy Bloyce, Gert Emmens, Jan Dieterich, Jens Peschke, Ruud Heij, Tom Coppens

January 20, 2021
Conquest of the Moon (as Penterakt) by Kubusschnitt is the new fantastic project !

June 8, 2010
To appreciate this band listeners really must enjoy looooong guitar solos. I guess fans of Ozric Tentacles could find this enjoyable.
Reply Notify me Helpful