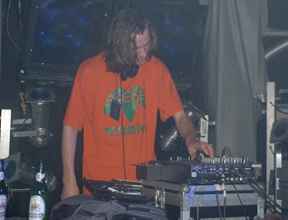 Real Name:
Frasier Runciman
Profile:
Winnipeg producer and Scottish expatriate Fanny began his musical career twenty years ago in the deconstructed rubble of the British punk rock explosion. Playing guitar for countless Edinburgh bands fusing everything from the banshees to def jam, Stravinsky to pfunk, Fanny's exploits brought him to the attention of local punk rock legends The Exploited, whom he joined in 1993. Frasier toured Europe and south America as the guitar player of The Exploited and is featured as "the human bone" on the Live In Buenos Aires concert tape. He also co-wrote and recorded the "Beat the Bastards" LP but subsequently quit the band before the album was released. Wattie replaced him in the credits with his unborn baby son. That's punk for ya! Frasier left Scotland to join Canadian funk rock icons Bootsauce and moved to Montreal shortly after. Despite their numerous gold records, incessant touring and a hardcore loyal following, Bootsauce was a star struck band, doomed by an inept record label. When they folded, Frasier found himself in Winnipeg, of all places, with a new musical ambition and vision. Having tired of guitars and rock clichés, Fanny returned to the sampler experiments which he first began in the eighties. Trading in his guitars for synths and a PC, Frasier was freed at last to fully explore his musical ideas. The result was "Come and get it up yer," a limited release cd of Fanny's raucous booty house. Not long after, Frasier met Aaron Funk, aka Venetian Snares, and the affect of his music was enormous. Frasier found a new playground and began pushing his material in bold and often ridiculous directions. Weekend trips to Wisconsin and the legendary barn parties in East Troy further seeded his ambitions. It was there that he caught the attention of Zod record boss Destro and Widerstand kingpin Eiterherd from Austria and plans were quickly made to release his new tracks. Collaborating with his small black dog puff, squealing under his chair, Frasier went on an intense writing binge in an effort to develop new and original music. Important to him also, is having something to say with his music, be it an emotional impression or a concrete idea. As a result, his music stands out in the anonymous electronic world for his personality, wit and humor.
Sites:
fanny.rhinoplex.org, MySpace
In Groups:
Bootsauce, The Exploited