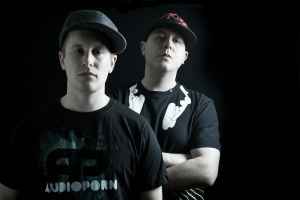 Real Name:
Matt Lowe, Josh White & Jeff Crake
Profile:
Comprising of Josh White, Matt Lowe on production, and Jeff Crake on vocals and production, Hybrid Minds represent a new musical force, with their melodic, soulful Drum and Bass already making waves. A synergy between influences including trip-hip, acoustic, soul and RnB, Hybrid Minds, consisting of Sensa, Haste and Grimm, draw on a myriad of influences to produce the smooth sound they are known for.

Although now an innovative force in Liquid Drum and Bass, Josh White and Matt Lowe are no strangers to bass music. Originally producing under the name Sensa, Matt Lowe used to use his talents to focus on the heavier side of Drum and Bass, with his imprint Motion Sensor Records releasing rough-edged music from himself and other Jump-up heavy weights such as Mutated Forms, Pleasure and Majistrate.

However, after drifting towards the more melodic side of Drum and Bass, Josh and Matt decided to use their talent to make a few liquid collaborations. After only a few joint efforts, the duo immediately shot to the forefront of the Liquid scene, with household names such as DJ Hype, Netsky, S.P.Y, Marky, John B, Camo & Krooked, and Grooverider all playing liquid tracks from the newly formed duo. Their method of bouncing ideas off each other in the studio yielded immediate results with one of their first tracks, The Place becoming one of the biggest liquid tracks of 2011, and receiving over 250,000 views on the UKF YouTube channel. Combining hard drums, delicate vocals and enchanting melodies, The Place features all the elements that now make up Hybrid Minds distinctive, soulful sound.
Sites:
Facebook, instagram.com, SoundCloud, YouTube, Twitter
Members:
Jeff Crake, Josh White (7), Matt Lowe (2)