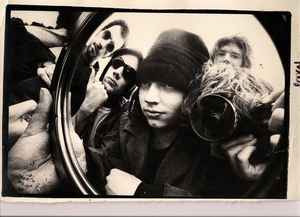 Profile:
Dublin-based Irish band, named after a turn-of-phrase from Catcher in the Rye, was formed in 1992 by singer/guitarist Ken Griffin, guitarist Ger Griffin (no relation) and bassist Stephen Murray. After adding Jimi Shields on drums, they released Trophy EP on Placebo records. In April 1993 they were awarded single of the week by NME. Their full-length album, "Shoulder Voices", on Beggars Banquet was released in October 1994 with a music video for the track "Miss Leader". Another EP, Threshold, was issued in early 1994.

In 1995 the band was signed to Warner Bros. Records and released "Horsedrawn Wishes" and the single "Speed to my Side". as well as a music video. They disbanded in 1997.
Sites:
irishmusiccentral.com
Members:
Ger Griffin, Jimi Shields, Ken Griffin, Max Corradi, Stephen Murray
Variations:
Viewing All | Rollerskate Skinny
R.S.S.