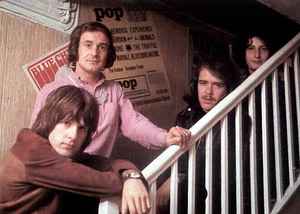 Profile:
One of the first art-rock bands to experiment with classical forms and fusion, the Nice was an early vehicle for the talents of keyboard virtuoso Keith Emerson, who plundered Mozart, Bach, Sibelius, and Tchaikovsky for his extended rock instrumental forays. The group began as the backing band for British soul singer P.P. Arnold and also featured guitarist David O'List, drummer Ian Hague, and bassist Lee Jackson. In September 1967, only four months after formation, the group split from Arnold, replaced Hague with former Mark Leeman Five drummer Brian "Blinky" Davison, and released a single called "The Thoughts of Emerlist Davjack," which became the title track of their 1968 debut album. The Nice quickly built a reputation as an exciting, theatrical live band thanks to Emerson, who dressed in silver lame, hurled knives into his Hammond organ to produce strange sounds, and mimed masturbation onstage. Emerson's antics spawned controversy with an adaptation of Leonard Bernstein's West Side Story song "America." The Nice performed it at the Royal Albert Hall while trying to burn a replica of an American flag, and Bernstein subsequently attempted to stop the song's release in the U.S., although it was released in edited form on the U.S. release of their second album Ars Longa Vita Brevis.

Emerson had emerged as the star of the group, both in terms of instrumental skill and showmanship, O'List, who had become erratic and unreliable had departed the group before the release of Ars Longa Vita Brevis to join the Misunderstood and subsequently Roxy Music. The reduction of the Nice to a trio allowed the band to further explore fusing rock with jazz and classical music, most notably with an adaptation of Bach's Brandenburg Concerto No 3 titled "Acceptance Brandenburger".

Nice and Five Bridges became big hit albums in Britain, but the group never broke through in America. In 1969, Emerson met Greg Lake, then with King Crimson, on a U.S. tour, and broke up the Nice in frustration in 1970 due to its lack of success. He, Lake, and drummer Carl Palmer formed the much more popular Emerson, Lake and Palmer, which expanded on Emerson's innovations with the Nice. After the Nice, Lee Jackson formed Jackson Heights which recorded four albums between 1970-1973 and Brian Davison formed the short lived band Every Which Way and was in a mid 70's line up of Gong. Davison and Jackson formed Refugee with keyboardist Patrick Moraz, this was however short lived as the group disbanded after Moraz was invited to replace Rick Wakeman in Yes. In 2002 and 2003 Emerson, Jackson and Davison reunited for a one off Nice tour in the UK.
Sites:
thenice.org.uk, Facebook, Wikipedia, progarchives.com
Members:
Brian Davison, David O'List, Ian Hague, Keith Emerson, Lee Jackson (2)
Variations:
Viewing All | The Nice
Emerlist Davjack, Nice

So is your comment... I think you mean "...the debut album was issued in '67 not '68...". About the gold lamé, I couldn't say for sure - but Emerson's stage wear with The Nice was definitely heading in that direction around that time. Otherwise, that's more or less right...

The Nice´s profile above is misleading, ...the debut album was issued in ´97 not ´98 and the gold lame didn´t appear until after ELP was formed :)