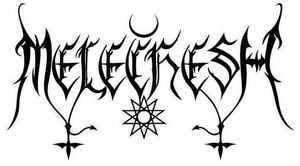 Profile:
Born in Israel, Melechesh started as a soloproject of talented guitarist Melechesh Ashmedi. Unable to reach the musical standards he wanted to achieve, Melechesh joined forces with Moloch (guitars) and Lord Curse (drums) to complete the line-up.

Obviously, being a Black Metal band in one of the most atypical places isn't easy, and the band took a long time to get some kind of deal that would allow their Satanism-based music to be recorded in the 'holy city' of Jerusalem. The band eventually recorded their debut official release, the EP titled "As Jerusalem Burns...Al' Intisar" which allowed them to slowly spread through the underground. Unfortunately for the group, their fame slowly got bigger and eventually leaked into the mainstream as newspaper started talking about this unusual Satanist cult. Authorities eventually wanted to arrest the band's progress and they were forced to live the holy cities, as each member slowly moved to the Europe. Lord Curse was unable to move and the band was forced to continue without him.

In 1999, Absu's Proscriptor joined the band as session drummer for the recording of the band's next release, "Djinn". Enjoying the sessions and the company of the band, Proscriptor eventually joined the band as a true fixed member and continued with the band, playing with them for their latest release ("Sphynx") aswell.
Sites:
melechesh.com, Facebook, Twitter, YouTube, open.spotify.com
Members:
Al'Hazred, Cimeries (2), Lord Curse, Murat Cenan, Nadim Khoury, Nicklaus Bergen, Russ Givens, Samuel Santiago, Thamuz (5), Yuri Rinkel