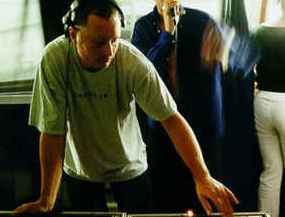 Real Name:
James Foster
Profile:
UK happy hardcore DJ and producer.
Jimmy j began his career in the music scene way back in the early 1990’s. Always a lover of breakbeat and dance he began to become a regular down Club Labrynth in Dalston, which was one of the biggest and most popular clubs of its era. He would spend every weekend listening to likes of Billy Bunter and Kenny Ken and knew that one day he would be up there on the decks! It wasn’t long before he got chatting to Joe the promoter and before he knew it jimmy was a resident DJ playing there every weekend.
His love of this type of music soon led him into the studio where he teamed up with Kniteforce guru Chris Howell. Over the next few years they produced some of the best hardcore tracks of that era (six days, take me away) and Jimmy cemented himself as one of the leading artists within the hardcore scene. Off the back of the music he produced with Chris jimmy DJ’d all around the world including countires like Japan, Canada, Usa and much of Europe.Of particular note is that their song ‘six days’ (which was an international hit) led to a 3 month tour of Australia with the Australian label ‘central Station’. The song charted at No4 in the Australian charts.
During this period jimmy also opened his first record shop Remix Records in Camden, which quickly became the place for up and coming DJ’s to buy their vinyl. By the middle to late 1990’s jimmy had opened a bigger and better shop in Kingston surrey and now sold a whole range of dance music over 3 floors. Meanwhile he had teamed up with the ‘Just Another label’ group and with Justin Time and singer Jenny they became Triple J. He achieved even greater success with this group and produced tracks like ‘Follow The Sun’ which became both a club and commercial success. Throughout this time he also branched out briefly on his own and produced some songs under the JJ label. Although this label was short lived due to Jimmy’s time constraints the song ’99 Red Balloons’ was produced which became a firm favourite with clubbers across the country.
In early 2000’s Jimmy’s love for the sun became too much and he moved to Spain to start a new life. The good news is that he is now back and his passion for the music and DJ’ing remains just as strong as it ever did and he is now back in the studio working with Chris from Kniteforce and with Jenny from Triple J so expect some new music from him soon....

October 10, 2017
No mention of him being on Dream FM? Plus he played a lot with Spinback
Reply Notify me Helpful