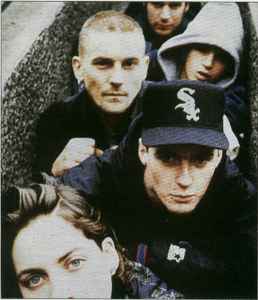 Profile:
Sugar Bullet formed in Edinburgh in 1988/89
two friends that had been in local Edinburgh bands
Shaun McCabe, Kenny Macleod & the unknown Izzy Coonagh started making music in various bedrooms in the city.

Making hip-pop, working with a collective of other singers, rappers, Dj's & musicians.

Namely Dj A1 & Babes ( from Nightstick ) Rab Allen ( the Scars ) Papa Zebi, & too many other muscians & singers to mention.

They first appeared on the radar after entering a competition run by Tennants Live
( Scottish beer sponsored magazine ) to find the best 10 unsigned acts in Scotland
they were one of the winners along with Botany 500 & Carol Laula.

Winning the competition brought them to the attention of various record company's
and resulted in them signing with Virgin records, they recorded two albums only one was released " Unrefined. " the release of the second album was halted after arguments with the record company.