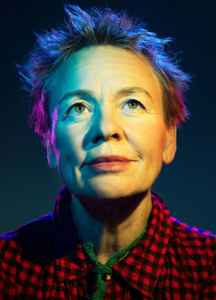 Although she played the violin from childhood, she received her formal training in the visual arts. Her work has incorporated graphics, lighting, sculpture, mime, slides, film, speech, music and many electronics, some of her own design. By 1976, her performances were featured prominently in museums and concert venues across Europe and North America. Anderson’s performance are sample elements from such genres of cultural performance as storytelling, theatre, ritual, dance, music, popular enter- tainment, and sports. Over her career, she has mixed the autobiographical with historical and, using one to filter the other , has built an idiosyncratic collection of words, sounds, gestures, and images downloaded from various social archives.

In 1981, Anderson's single "O Superman" reached number two on the British pop charts. Until then music had been only one of the media employed in her work. Anderson has achieved greater visibility than most composers of her generation, her unexpected crossover into the popular domain brought her a degree of fame usually unavailable to avant-garde artists.