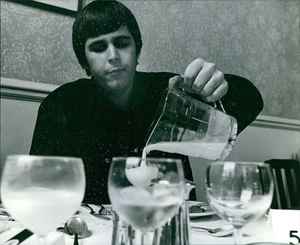 Real Name:
Carl Dean Wilson
Profile:
Carl Wilson (born December 21, 1946, Hawthorne, California, USA – died February 6, 1998, Los Angeles, California, USA) was an American rock and roll singer and guitarist, best known as a founding member, lead guitarist and sometime lead vocalist of The Beach Boys. He was inducted into the Rock and Roll Hall of Fame in 1988. He was the youngest brother of fellow band members Brian and Dennis, and cousin of Mike Love. Son of Murry Wilson and Audree Wilson. Uncle of Carnie Wilson and Wendy Wilson.

Like most members of The Beach Boys, Carl was a multi-instrumentalist, playing lead, rhythm, bass, and acoustic guitars, keyboards, and occasionally drums onstage.

After his elder brother Brian's retirement from the stage in 1965, Carl became the de facto leader of the band onstage, and shortly after became the band's in-studio leader, producing the bulk of the 1967-1973 albums "Smiley Smile, Friends", "20/20", "Wild Honey", "Surf's Up", Carl And The Passions - "So Tough", and "Holland".

Carl's leadership role in the band diminished somewhat in the late 1970's, both due to Brian's brief re-emergence as the band's producer and Carl's own substance abuse problems. He nonetheless remained a prominent and recognizable voice in the band, taking lead vocals on many songs and serving as "mixdown producer" on the Brian-produced "Love You" album. By the time of recording of 1979's "L.A. (Light Album)", Carl again found himself filling the vocal and songwriting gap left by a retreating Brian Wilson.

As a lead vocalist Carl was the last member of the group to be assigned lead vocals to sing. His first turn at the solo mic was on 1964's "Pom-Pom Playgirl", from "Shut Down Vol. 2". Over the years he has been considered one of the greatest singers in pop/rock, deftly handling ballads such as "God Only Knows", pop gems like "I Can Hear Music", and rock and rollers including "Darlin'" and "Keeping The Summer Alive". On tour, particularly in the late 1960's and 1970's, his extraordinary voice often replaced that of his brother Brian's on songs originally sung by the latter, including "Don't Worry Baby", "Surfer Girl", and "Let The Wind Blow".

Carl was not the most controversial member of the band. To his credit, his quiet, private life endured only two ripples: first, in the late 1960's, he emerged victorious from a fight with the US government over his Conscientious Objector status regarding the Vietnam draft (he and the band agreed to play a number of free benefit concerts in lieu of Carl being drafted); second, in the late 1970's he appeared on a television simulcast concert in Australia with The Beach Boys while inebriated (he later explained it away as a reaction to flu medicine).

By the early 1980's The Beach Boys were in disarray. Frustrated with the band's sluggishness to record new material and reluctance to rehearse for live shows, Carl Wilson took a leave of absence in 1981, rather than remain as part of what he saw increasingly becoming a nostalgia act. Thence, he released a 1981 solo album, "Carl Wilson", to little critical notice, with songs co-written with Myrna Smith - particularly the extraordinary "Heaven" and the radio hit "Hurry Love". He recorded a second solo album, 1983's "Youngblood", in a similar vein, but by the time it was released he had already rejoined The Beach Boys. Although "Youngblood" did not chart, a single, the John Hall and Johanna Hall penned "What You Do To Me," did, and it took on new meaning after the death of brother Dennis in December 1983. Youngblood also featured a cover of John Fogerty's "Rockin' All Over The World", which he performed on tour with The Beach Boys in the 1980's.

During his brother Brian's mental health struggles and in-and-out participation in the band in the 1980's, particularly after the death of brother Dennis, Carl was closely involved in the legal and moral support of Brian, and was a key player in supporting Brian's second wife Melinda in the ousting of controversial psychologist Eugene E. Landy from Brian's affairs.

Carl was diagnosed with brain and lung cancer in early 1997. Despite his illness and chemotherapy treatments, he continued to perform after diagnosis. Carl played through The Beach Boys' entire summer tour ending in the fall of 1997. Carl Wilson lost his battle with cancer on February 6, 1998, just two months after the death of his mother, Audree. He was survived by his brother Brian, wife Gina (daughter of Dean Martin) and two sons Justyn and Jonah from his first marriage to Annie Hinsche (sister of Dino, Desi & Billy member, Billy Hinsche, who was a mainstay of the Beach Boys' support band on tour).

A handful of additional recordings of Wilson have been released as the album "Like a Brother", by "supergroup" Beckley-Lamm-Wilson, comprising Carl Wilson, Gerry Beckley of America (2) and Robert Lamm of Chicago (2).