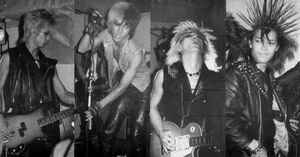 Japanese '80s punk/hardcore band. A bit of side note, Kuro gained nationwide infamy in Japanese HC scene after beating up all the members of 44Magnum in Kyushu around 1984, only because they all had blonde hair and were on a major label....!

In 2008 some rumors broke about the reunion of Kuro. Unfortunately drummer Sugi denied it and said that there won't be any activity as Kuro, because vocalist Morikawa and guitarist Hide are dead.
Members:
Hide (27), Kuchihara, Manzi (2), Morikawa (2), Sugi (6)
Variations:
Viewing All | Kuro
KURO, 白, 白 Kuro