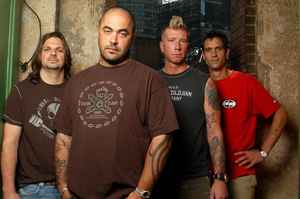 Profile:
The line-up of this US alternative metal act, comprising Aaron Lewis (vocals), Mike Mushok (guitar), Johnny April (bass) and Jon Wyscoki (drums), came together in February 1995. The following year, having established themselves as a leading live draw, the band recorded and distributed their debut, Tormented. The album went on to sell over 4,000 copies by word of mouth, and also gained them a high-profile support slot for Limp Bizkit's Connecticut show in October 1997. An initial misunderstanding about Tormented's satanic cover art almost saw them coming to blows with Fred Durst, but Limp Bizkit's lead vocalist was impressed enough to invite the band to record demos for his production company. A contract with Flip Records ensued in early 1998, and the band decamped to Pearl Jam's studio in Seattle to record their major-label debut with producer Terry Date. A reworking of Public Enemy's "Bring The Noise", featuring Durst, was left off the final tracklisting. This proved to be a good choice, as the songs on Dysfunction eschewed the overt hip-hop influence of Limp Bizkit for a more traditional style of hard rock rooted in the early 90s sound of Alice In Chains. The band's second album, Break The Cycle, debuted at the top of the US album charts in June 2001.
Sites:
staind.com, Wikipedia
Members:
Aaron Lewis, Johnny April, Jon Wysocki, Mike Mushok, Sal Giancorelli
Variations:
Viewing All | Staind
Stained

February 14, 2018
Great band. They came a really long way. Sadly, some people don't appreciate all genres of music. I'm always open to opinions, however, who does it help to write rude comments? There's a difference between stating an opinion and straight insulting someone's hard work. I would never write something so blatantly insulting about any musician no matter how much I disliked them. I find it very sad that I keep seeing comments like that in many of these review sections of the Discogs site.

I have been a fan of Staind since the release of Dysfunction. They are very talented musicians and Aaron Lewis' voice is beautiful yet haunting at the same time. Aaron takes the very personal issues and struggles in his life and makes them the subject of most of his lyrics. The lyrics have definitely helped me when I was younger - and still today - to feel like I wasn't alone, and that someone else out there feels exactly the way I feel. In my opinion, that one of the things that make a great band.
Reply  See 1 reply Notify me 9 Helpful