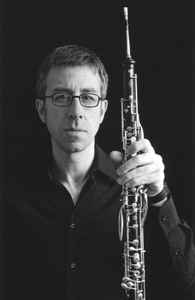 He studied the clarinet, saxophone and English horn with Norbert Bourdon and Guy Bordier in France, and with Alexandra Knoll in New York.
RGP is strongly influenced by the non-tempered and modal music of the East (Turkey, Iran, Armenia, Ethiopia, India). He writes and performs with his contemporary trio Solaris/Солярис (minimalist jazz) and his noise-indus duo Atonalist.
He also studied composition in Paris with Karol Beffa and Edith Canat de Chizy, and has written music for theatre, contemporary ballet, and for films (in France, Germany and the USA). He scored Die Indianer kommen!, directed by Carola Wedel, which premiered at the 2016 Berlinale Film Festival.
He has written orchestral scores for the national radio stations France Inter and France Musique, as well as documentary music for the TV channels Arte, France 2 and ZDF.

As composer Renaud Pion has released several albums under his own name since 2001, as well as performing solo concerts with real-time electronics.
He's also a member of bands : his contemporary trio Solaris/Солярис (minimalist jazz) since 2013, and his duo project Atonalist‘s (noise/indus) with musician Arnaud Fournier, and guest vocalist Gavin Friday. He recently joined composer Jun Miyake’s ensemble, with which he will perform in Japan and Brazil in 2017.

As an arranger, his orchestral credits include many pop artists (Cathal Coughlan; the band Tanger …). He has also been involved in numerous film soundtracks as an arranger and conductor, or as score composer himself (Tadpole by Gary Winick, starring Sigourney Weaver, for Miramax).