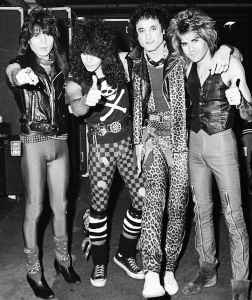 Profile:
Quiet Riot is a heavy metal band from Los Angeles, CA. The band was formed in 1975 by guitarist Randy Rhoads, bassist Kelly Garni, vocalist Kevin DuBrow and drummer Drew Forsyth. Despite their local popularity, the group was unable to secure a record deal in the United States. Their first two albums, 1978's "Quiet Riot" and 1979's "Quiet Riot II" were released by CBS/Sony in Japan. In 1979, Rhoads departed to accept an offer to join Ozzy Osbourne's solo band. DuBrow and Forsyth continued on with new members before splitting in 1980. After that, DuBrow continued with various players under the name "DuBrow". Eventually, Dubrow included Kevin, guitarist Carlos Cavazo, drummer Frankie Banali, and bassist Rudy Sarzo (who initially joined Quiet Riot after the band recorded their 2nd album). In 1982, DuBrow changed their name to Quiet Riot. For many fans, this is the quintessential Quiet Riot line up. In 1983, the band released "Metal Health" which would be the first heavy metal album to reach the top of the Billboard charts. The band was unable to reproduce this success, however, and this, combined with their unhappiness with their recording contract and Kevin Dubrow's media assaults on his contemporaries led to the band fracturing, culminating in Dubrow being fired from the band he had co-founded. The band recruited singer Paul Shortino as Dubrow's replacement before splitting in 1989.

In 1990, Dubrow and Cavazo relaunched Quiet Riot. By 1997, Banali and Sarzo would rejoin the band. The band continued to release albums, although they never came close to their 1983 commercial heights. In 2003, the band split again, but Dubrow and Banali reformed Quiet Riot the following year with bassist Chuck Wright, who had done stints in Dubrow and Quiet Riot throughout the 1980s, and guitarist Alex Grossi. in 2007, Dubrow died from a cocaine overdose. Banali issued a statement mourning his friend and stating that he would not continue Quiet Riot without Kevin. However, in 2010, Frankie reversed his stance and reunited with Alex Grossi and Chuck Wright to revive Quiet Riot with previously unknown vocalist Mark Huff. Huff was let go from the band at the beginning of 2012. He was eventually replaced by another unknown, Scott Vokoun. The band split with Vokoun in 2013. He was replaced by Jizzy Pearl (formerly of Love/Hate and Ratt). In 2014, a documentary called "Well, Now You're Here, There's No Way Back", was released. The film, directed and produced by Banali's fiancee, focuses on Banali's attempts to restart the group, his anger over Dubrow's death, the group's tenure with Mark Huff, and their discovery of Scott Vokoun. The band continued to cycle through vocalists. Pearl departed in 2016 and the band was fronted by Seann Nichols and then former American Idol contestant James Durbin before Pearl returned again in 2019. In August 2020, Frankie Banali died after a battle with pancreatic cancer. Per his last wishes, the band announced they would continue with drummer Johnny Kelly. In 2021, former bassist Rudy Sarzo returned to the band.
Sites:
quietriot.band, Wikipedia
Aliases:
Ravers (7)
Members:
Alex Grossi, Björn Englen, Carlos Cavazo, Chuck Wright, Drew Forsyth, Frankie Banali, James Durbin, Jim Wilkinson (4), Jimmy Waldo, Johnny Kelly, Kelly Garni, Kenny Hillery, Kevin Dubrow, Kjell Benner, Paul Shortino, Randy Rhoads, Rudy Sarzo, Sean McNabb
Variations:
Viewing All | Quiet Riot
Riot, クワイエット・ライオット