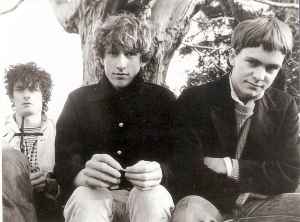 Profile:
Indie rock band formed in Dunedin, New Zealand in 1978. They originally broke up in 1982, but came back in 1988 and are still touring. In the years they were no longer a band, songs kept being released, including rarities and live recordings. Bands like Pavement and Yo La Tengo have cited them as a big influence.
In September 2017 The Clean were inducted into the New Zealand Music Hall Of Fame.
Sites:
audioculture.co.nz, Bandcamp, Wikipedia
Members:
David Kilgour, Doug Hood, Hamish Kilgour, Peter Gutteridge, Robert Scott
Variations:
Viewing All | The Clean
Clean

May 17, 2012
Does anybody have a copy of the 1988 repress of Boodle, Boodle, Boodle? I'm ALMOST positive I have an original - one Red/one Yellow label, no mention of WEA or 1988 anywhere - but the notes don't give me much to go on. I'm a new seller and ever-so-slightly unnerved about getting this wrong. If only I had the 16-page comic, all this would be unambiguous!

Any help would be appreciated, thanks. - LD
See 1 reply