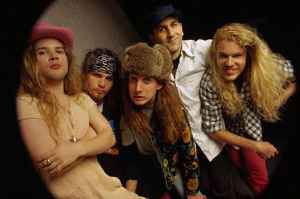 Profile:
The band formed by Jeff Ament, Bruce Fairweather and Stone Gossard following Green River splitting up. They received a lot of attention in Seattle and the beginnings of international interest with the 'Shine' EP. However, as they prepared to release their major label, debut album, the 'Apple', lead singer Andrew Wood overdosed on heroin and died, leaving the band in tatters.