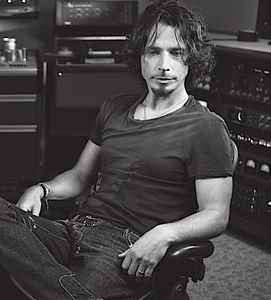 Real Name:
Christopher John Boyle
Profile:
Chris Cornell (born July 20, 1964, Seattle, Washington, USA - died May 18, 2017, Detroit, Michigan, USA) was an American singer, songwriter, guitarist and drummer.
best known as the lead vocalist and rhythm guitarist for the rock bands Temple Of The Dog, Soundgarden and Audioslave. He also had a solo career and contributed to soundtracks.
He is widely regarded as one of the greatest male voices in rock history with a range of four octaves, a sustain for the ages and an incomparable natural vibrato.
He was married to Susan Silver (divorced in 2004). Married again and left behind his wife Vicky Cornell, Chris also left behind three kids, ages 16, 12 and 11.
Cornell struggled with depression for most of his life. He was found dead in his Detroit hotel room in the early hours of May 18, 2017, after performing at a Soundgarden concert an hour earlier at the Fox Theatre. His death was ruled a suicide by hanging.

November 22, 2019
Due to overwhelming demand for the 2018 pressing of the original box set collection, you now have another chance to celebrate the recorded legacy of musical icon and singer/songwriter Chris Cornell, with a limited-edition color vinyl edition of the Chris Cornell Super Deluxe LP box set on November 22.

The box set will be re-released by Cornell’s wife, Vicky Cornell on behalf of The Chris Cornell Estate through UMe, and available exclusively via the Chris Cornell official store.
See 1 reply

May 24, 2017
I was shocked and saddened like so many people when I heard of Chris Cornell's passing. Since then I've been listening to Soundgarden non-stop and it has reinforced that they are the pick of the bands from that era and that Cornell is probably the most talented singer/songwriter/musician in a scene/era brimming with fantastic bands, musicians and singers. His and Soundgarden's legacy will live on long after the rest of us have shuffled offstage for good.

May 18, 2017
As a teenager I would say often "I want my hair to look like Chris Cornell's in the movie Singles".

May 18, 2017
Am very shocked, as many fans are about his sudden passing. Chris "Say Hello 2 Heaven", as you are already greatly missed. May you rest peacefully.~~