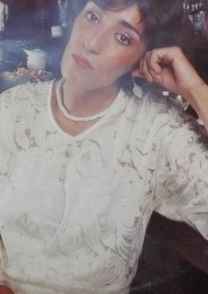 Real Name:
Chantal Sitruk
Profile:
Disco singer
Pseudonym of vocalist Chantal Curtis a.k.a. Chantal Sitruk (19--(??) - 1985). She hailed from Tunisia, and is best known for the disco song "Get Another Love" and "Hit Man" both of which were put out in the US on Key Records.

Producer Pierre Jaubert tells DiscoMusic.com that he discovered her in the late 1970s on the streets of Paris. She was walking down the street while talking to another woman and he instantly liked the quality of her voice. Jaubert asked Chantal if she could sing. She said yes and that she was looking for work.

It's at the time of the release of her first album that her life went spiraling out of control. Her boyfriend, Philippe Briche who was a talented arranger and pianist, turned her on to hard drugs and she served some prison time because of it. Chantal recorded "Can't You Feel It" and several other tracks including Disco Dance, but because she was serving time in prison, Jaubert released the songs on an album under the pseudonym Michele. This was released in France on Epic Records and in America on West End Records with the big hit being "Disco Dance."

Fast forward to 1979 and the duo work on releasing the Get Another Love album under her name. The album was released in America on Keylock Records out of New York and saw widespread discotheque and radio exposure.

Chantal was tragically murdered in Israel in 1985 by a bullet intended for Philipe, her drug-dealing boyfriend. The source of this is Pierre Jaubert, her producer.
Aliases:
Brenda Mitchell, Chantal Alexandre, Chantal Curtis, Chantal Sitruk, Julie Sitruk
Variations:
Viewing All | Michele
Michelle, Michèle, Michéle