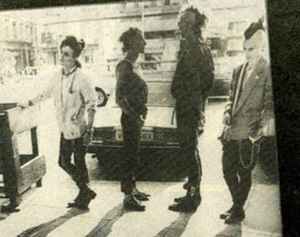 They did a John Peel Session in 1984 and toured with The Danse Society.

Marcus Scott and Mark Tinley were also in the batcave band Let's Wreck Mother. They apparently had a huge falling out over Marcus putting blue joke dye in the rim of Mark's hat making his forehead go blue. Mark refused to go to a band rehearsal that day and left the band. Mark Tinley later formed another batcave band Tabatha's Nightmare with three other people and eventually forgave Marcus who then joined the band, as well. Mark Tinley was also in the hip hop/synth-punk group Diskord Datkord with Johnny Slut of the legendary deathrock band Specimen.

February 13, 2003
I was the drummer in Dormannu in the early '80s. Powdered Lover was written by Mike Muschamp and Simeon Warburton and I was brought in to play drums and consequently ended up in the band. We toured with Danse Society with Mark Tinley (guitar) Wig (Bass) and Christine Johnstone (Keyboards). Mike had parted company with us by this time.
Reply  See 1 reply Notify me 5 Helpful