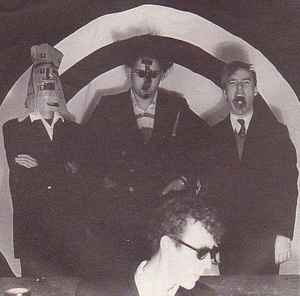 Profile:
A neo-dadaist group from Redditch, UK, formed in 1977. Guitarist Martin Seys and drummer Ethos Yapp left the band early. From there on, as a 4-piece, they managed to release six singles and two full albums (most of them on Small Wonder; some appeared in the indie charts Top 30), interspersed with some dada happenings. Between July 1979 and November 1982, they were also asked to make four sessions for the legendary John Peel radio show.
In a true dada manner they gave birth to the “DadaCravat Laboratories” (D.c.L), which enabled them to form many aliases, where their music appears more danceable. The classic line-up changes only on their final 12” release in 1985.
A reformed version of The Cravats including original members The Shend (vocals) and Svor Naan (saxophone), with Rampton Garstang (drums) has been performing since August 2009 and, since 2013 has included Viscount Biscuits (guitar) and Joe 91 (bass guitar).

October 6, 2020
Dadaist Punk with horns. It was good then, it is good now.
Reply Notify me 1 Helpful