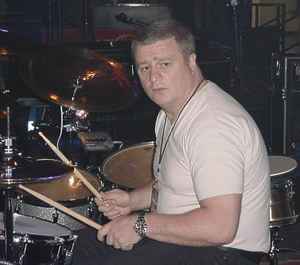 Real Name:
Paul Thompson
Profile:
Drummer, aka The Great Paul Thompson (Born 13th May 1951 Newcastle, UK). He joined Roxy Music in June 1971 replacing Dexter Lloyd having previously been in a variety of Newcastle bands. His only songwriting credit to date is 'Your Application's Failed' which is a B-Side to 'All I Want Is You'. Paul wrote it on a guitar and took it to Phil Manzanera.
Paul played on the first six Roxy albums and departed due to the time honoured reason of there being musical differences. During his period with Roxy, he also played on the first four Bryan Ferry solo albums, and both Andy Mackay's and Phil Manzanera's solo works. He also played on the first Eno album 'Here Come the Warm Jets' and toured with Phil Manzanera's 801 in 1977.
His post Roxy session work included such diverse acts as punk band, The Angelic Upstarts on their 1983 album 'Reason Why' and Blues/Rock man Gary Moore on his Emerald Aisles Live In Ireland tour in 1985. He joined 'Concrete Blonde', who covered Roxy's "End Of The Line" and had two successful albums, 'Bloodletting' and 'Mexican Moon'. He spent most of the 1990's in local bands in his native Newcastle.
He joined the reformed Roxy Music for their 2001 tour, much to the delight of the fans, and proved show after show that he was a major part of the history of Roxy Music and an integral part of the Roxy sound. Paul joined Bryan Ferry in the studio after the Roxy Music tour to record some drums to finish his long awaited album Frantic, and also joined Bryan for his 'Frantic' 2002 tour.
In 2013 he joined Lindisfarne's new lineup.
Sites:
pauldrum.com
In Groups:
801, Andy Mackay & The Metaphors, Concrete Blonde, Lindisfarne, Roxy Music, Smoke Stack Crumble, Yellow (5)
Variations:
Viewing All | Paul Thompson (2)
P. Thompson, Paul Thompson, Thompson