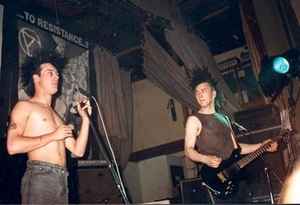 Previously named Mock Death and Nuclear Filth, Icons Of Filth was formed 1979 in Cardiff, Wales (UK). Despite the band's extensive touring and recording schedule, they drifted apart in 1985.

They remained on hiatus until 2001, which yielded a new album Nostradamnedus and a return to touring, though this was cut short when unfortunately, vocalist Stig suffered a heart attack and passed away shortly after a gig in London on October 23rd 2004.