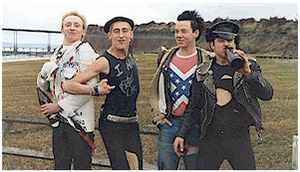 Profile:
UK punk band, formed in 1982 as a joke by members of Vice Squad and its roadies. One of the roadies handed a copy of one of their recordings to Simon Edwards (Riot City Records). From that recording one song ended up on a hardcore punk compilation and Chaotic Dischord was signed to Riot City Records before Edwards realised that it was not supposed to be a serious band.
Sites:
Bandcamp, MySpace, Wikipedia
Members:
Ampex (2), Aphrodite (6), Dave Bateman, Evo (6), Ransid, Shane Baldwin
Variations:
Viewing All | Chaotic Dischord
C.D., Chaotic Discord, Chaotik Dischord

March 29, 2022
There Back https://chaoticdischord.bandcamp.com/releases Got New Download Single Songs To Fuck Your Mum To.
There Still Snotty As Ever.