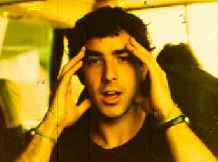 Profile:
This was a project of the mysterious "Jill and Carla", who were later revealed to be one Phil Western (with only his 808 and Eventide). Future work as Kone was planned to be a collaborative effort involving Key and Western but it never materialized as Western left the Subcon fold in 2002.
Sites:
MySpace
Aliases:
Cap'm Stargazer, Phil Western, Philth, Stellar Sofa, XMT