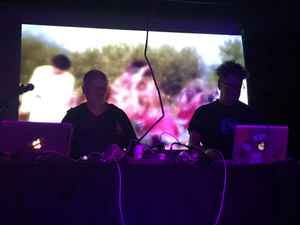 Profile:
Severed Heads is an Australian group based and founded in Sydney in 1979. The group was originally known as Mr And Mrs No Smokin' Sign who started recording in 1977 and comprised of Richard Fielding and Andrew Wright (8). Tom Ellard joined the group in 1979 and shortly thereafter Wright departed. Once Wright left the group Fielding decided to change the name to Severed Heads. Fielding eventually left the group too, in 1981, citing it as becoming "too rock 'n roll", leaving Ellard as the sole continuing member of the group. A variety of people have played in Severed Heads, including Garry Bradbury, Paul Deering, and Stephen Jones (3), but over time the group has devolved to Tom Ellard.

Early Severed Heads music was characterised by the use of tape loops, noisy arrangements of synthesizers, and other dissonant sound sources, putting Severed Heads in the general category of industrial music. After several releases in that vein, Severed Heads began incorporating various popular music tropes, such as a consistent 4/4 rhythm, strong melodic lines, and resolving chord arrangements. This move was underscored by the incorporation of mimetic devices, such as drum machines. The result was a striking hybrid of the avant-garde, EBM and Synth-pop.

Severed Heads were signed to Nettwerk Records in North America, and Volition Records in Australia, and charted in 1984 with the song "Dead Eyes Opened". This deal lead to a world tour, which was as much a multimedia event, thanks to the video work of Stephen Jones. A period of more or less dance music influenced releases followed until Volition went bankrupt and Nettwerk dropped the band which led to a re-activation and digital distribution via their own Sevcom imprint.

On 4th February 2008 Tom Ellard announced the end of the "Severed Heads".

However, they continue to play occasional live shows and played on 16th and 17th December 2011 at the 10th Anniversary BIM Fest in Antwerp, Belgium.
In 2013 they played the Adelaide Festival in Australia again.
2015 saw a performance at the Metro in Chicago for Cold Waves IV, as well as a North American tour.
2016 saw performances in Europe and back on their home turf Australia.

October 16, 2021
This is a strange "review" I'm afraid. I am not really a fan in general of Severed Heads' work. But I will say this. "Wonder of all the World" is a track that I want to be played at my funeral. No words will capture what it says to me. That's it. YMMV. Some may like that, and SE other music, some may not. I hope more and more people listen to WOATW. For me, it encapsulates a dream of a life lived. And if that is an endorsement, I'm glad I've helped Tom Ellard and colleagues. If not, apologies, and have a good one.
Reply Notify me 1 Helpful

November 9, 2017
Just saw them live again last week, they've pretty much established themselves as being the pioneers in Australian electronic music. Good to see Tom Ellard is still full of ideas and has things in the pipeline to interest us further. Can't say that for many artists from the 80s.
Reply  See 2 replies Notify me 2 Helpful

Without doubt a pivotal band in the history of rythmic electronics , while moroder was the first who managed to splice and pin multitrack to
sequencer gate clock output to create subdivided rythmic loops it is mister Ellard that took it to a whole new level. The sheer madness of sounds that whirled around my head on the brilliant 'goodbye tonsils' , from it's barroom brawl tapeloops and spittoon ms20 wrangling's , a
world of sounds sometimes so complex yet mesmerising. Come visit album was they're highpoint and from then on they kind of lost it , balancing between hunger for a hit record or the cleaned up version of the 'heads' sound winking to early house , a lesson to be learned in music is don't try to do many things mediocre , stay with the one trick you know best. The legacy of 'heads' copycats was manyfold but perhaps the most blatant ones were Aphex T. on his early output.

March 7, 2008
Severed Heads are important because they more or less invented the whole industrial-electronic cross-over genre. Without them, and albums such as City Slab Horror, Bad Mood Guy, Come Visit The Big Bigot and of course the quintessential Stretcher; bands such as Nine Inch Nails, Skinny Puppy, KMFDM, et al would perhaps never have been what they are and were. Severed Heads, without anyone hardly even realizing it in the 80s, managed to invent a whole new style of music that would sweep the world in the 90s all on their little own out of the far removed antipodes, without any radio station in Australia or ARIA ever even acknowledging they existed. A touch of genius perhaps and also a necessary and inevitable loop in the structure.
Reply Notify me 10 Helpful

One of my favorite bands to listen to when I was in high school. Over the years they went from industrial/experimental to techno/industrial-pop and I must say that I don't care for anything after the release "Cuisine (With Piscatorial)". What I loved most about Severed Heads was their ability to make industrial and cheese sounds so cool and it was something to sing to as well. "Dead Eyes Open" will always be a classic but I loved "Petrol (Remix Five)" and "We Have Come To Bless This House (Remix Two)" best, which just so happen to be on the Maxi single as "Dead Eyes Open".
Tom Ellard also runs Sevcom and his focus is re-releasing the old Severed Heads releases on CDr, which is good seeing as how most of the originals are sold out.

August 9, 2003
One of the greatest electronic artists ever. Apparently they were influences on NIN and Skinny Puppy. At times they sounded like New Order, Erasure and Throbbing Gristle all ran into each other in a blender and then were poured over some ear splitting noise. I have too many favorite songs to name but my all time favorite that never changes is 'Harold And Cindy Hospital'.
Reply  See 3 replies Notify me 6 Helpful