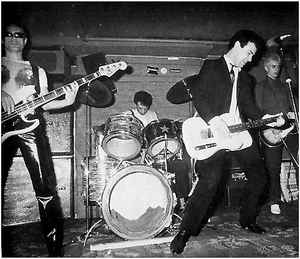 Profile:
999 are an English punk rock band, formed in London in December, 1976. From the period of 1976 to 1985, the line-up of 999 consisted of Nick Cash (vocals, guitar - real name Keith Lucas, not to be confused with Nicholas John Cash), Guy Days (lead guitar), Jon Watson (bass guitar) and Pablo LaBrittain (drums). (As a result of injuries sustained in a motor accident, LaBrittain was temporarily replaced by drummer Ed Case aka Paul Edwards in 1980.) Jon Watson left the band in 1985; being replaced by Danny Palmer, who remained with the band until 1991. Palmer was replaced by Arturo Bassick, who remains the bass guitarist with 999 to this date.

Between 1978 and 2007, 999 released fourteen singles and twelve studio albums. Five of the singles released by 999 between 1978 and 1981 charted within the Top 75 in the UK Singles Chart, with one further single released by 999 in 1978, Homicide, charting within the Top 40. In addition, as a result of extensive touring in the United States in the early 1980s, the band's third and fourth studio albums: The Biggest Prize in Sport and Concrete, each charted on the U.S. Billboard 200.

Despite having formed in 1976, 999 have only experienced two permanent changes to their original line-up and has continued to record and play live to the present day, leading AllMusic to describe the band as "one of the longest-lived groups of the punk era."
Sites:
MySpace, nineninenine.net, Wikipedia, genius.com
Members:
Arthur Billingsley, Danny Palmer (2), Eddie Case, Guy Days, Jon Watson (2), Keith Lucas, Pablo Labritain, Stuart Meadows (2)
Variations:
Viewing All | 999
9.9.9., Nine Nine Nine, Nine Nine Nine (999)

New Wave 1976-1980 by M.Isaev
Natural Numbers by lehapanin666
Artists Played On “Dark Wave” by crimsonmetal74
Artists I Have Seen Live by EliasRafael
“The Encyclopedia Of Punk” by crimsonmetal74
Artists I've Seen by Yoss60
3 letters punk by TwinPowerForce
My 100 Best Live Gigs by expensivebeingpunk
Bands I Saw Before I Turned 21 by mr.dna
Bands seen Live by markymax
Artists in My LP Collection by sillypenta
Punk vinyl by npitcavage
Favorite Artists by fortinosamano
Bands I've seen live by mudcrow
View More Lists →