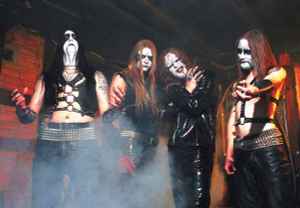 Profile:
Black metal band from Stockholm, Sweden, founded by guitarists Lord Ahriman (Mikael Svanberg) and Blackmoon (David Parland) in 1993. They were later joined by Draugen (Joel Andersson) and Themgoroth (Paul Mäkitalo) and eventually recorded their self-titled and self-financed debut EP at Uni-Sound studio, released on the 4th of May, the day the band also played their very first gig. After the release, Draugen left the band and was replaced by Equimanthorn (3) (Peter Eklund). The band was signed to No Fashion Records in 1995 and switched to Abyss Studio. For their first own tour, Emperor Magus Caligula (Magnus Broberg) (original vocalist of Hypocrisy) joined the band as vocalist and became a permanent member.

In 1996, Dark Funeral released their first full-length album, "The Secrets of the Black Arts" which was well-received and enabled the band to get deals with Metal Blade Records (North America) and Mystic Production (Poland). Following the contracts, vocalist Themgoroth and drummer Equimanthorn left the band along with co-founding member Blackmoon. Alzazmon (Tomas Asklund) was recruited as the new drummer.

The band went on the first round of the "Satanic War Tour" throughout Europe together with Necromass in 1996, followed in 1997 by a second round with Ancient (2) and Bal-Sagoth as support. After appearing on "The American Satanic Crusade Tour" with Usurper (2) as support, the band returned to Sweden to record the album "Vobiscum Satanas".

In 1998, Dominion (8) (Matti Mäkelä), joined as session bass player as Dark Funeral played at the "The Ineffable Kings of Darkness" Tour with Enthroned and Liar Of Golgotha, as well as appearing at the Swedish Hultsfred Festival. After the tour, Typhos (Henrik Ekeroth) was replaced by Dominion as the bands second guitarist, with Emperor Magus Caligula picking up the bass. Alzazmon also left the band, and the band's long time friend Gaahnfaust (Robert Lundin) replaced him as drummer. The following year meant even more touring, playing the "Black Plague Across the West" tour in Mexico and America, as well as "The Satanic Inquisition" tour with Dimmu Borgir.

January 29, 2011
The selftitled MCD and The Secrets of the Black Arts are amongst the best releases of Swedish black metal ever. Unfortunately Dark Funeral's great inspiration died when Blackmoon left the band.
Reply  See 2 replies Notify me 7 Helpful