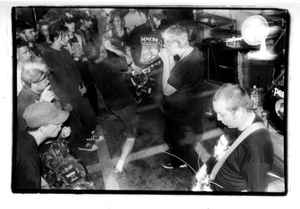 Profile:
UK based hardcore / punk / thrash group. The band formed in Newcastle upon Tyne sometime in 1995 and were initially called Spite. After playing their first gigs in Belgium, and finding that there was another band from Bristol with the same name, opted for the name Ebola…
Being influenced by a lot of the extreme music coming out of the US and other parts of the world they decided to try and put their own spin it.

The first LP was perhaps a stepping stone from their previous bands, but the Imprecation 7” pretty much achieved the sound and aesthetic they were aiming for.
Activity slowed after this due to a less stable line up and the fact that only two of the band members still lived in Newcastle.
The last Ebola release during the lifetime of the band was the split 7” with Servitude, the split LP with Jinn being released posthumously.
Members:
Andrew Nolan, Andy Irvine (2), Chris Gascoigne, Duane (8), Jonathan Shaw, Karin Reynaert, Micky McGuinness, Nick Loaring, Set (6)