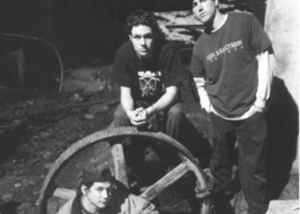 Profile:
Engine Kid was formed in Seattle, WA in the early 1990s by bassist Art Behrman, drummer Chris Vandebrooke, and guitarist/vocalist Greg Anderson. The group initially sought to imitate the sound of Slint, but this relationship would progressively shift from pure imitation to loose influence as the band began to experiment with jazz and nascent post-rock sounds in their later material.

Behrman departed the band after the recording of their first 7" and was replaced by Brian Kraft, and around year later Vandebrooke would also later leave, being replaced by Jade Devitt on all subsequent releases.