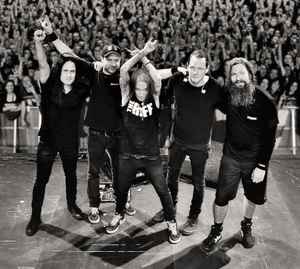 The band was formed in 1993 as "IneartheD" by Alexi Laiho and Jaska Raatikainen. Different sources tend to categorize them stylistically in different ways, but according to the lead singer and guitarist Alexi Laiho, "it's just metal and that's it".

In 1997, Inearthed made a record deal with a small Belgian label to release their first album "Something Wild", but before the release the band was contacted by Spinefarm Records, who also wanted to work with the band. Since they were already signed to another label, they had to fake a split-up and change the name to be able to release the album through Spinefarm. They chose "Children of Bodom" as the new name, inspired by the unsolved Lake Bodom murders, which took place in Finland in 1960 (teenagers camping next to the Lake Bodom were slaughtered by a maniac).

In November 2019 Raatikainen, Seppälä and Wirman announced that they were leaving the band, which also marked the end of Children of Bodom. Their final performance was in the Helsinki ice hall on December 15, 2019. Since he wouldn't be able to legally continue performing under the "Children of Bodom" banner, Alexi Laiho formed "Bodom After Midnight" in March 2020.

August 7, 2021
Someone please make a master listing for the Stockholm Knockout Japanese SHM I made. I don’t know how to make it a master. I’d appreciate it!!!!

January 9, 2021
Hate Crew Deathroll - highly recommended for Melo-Death and guitar beginners. Without him COB and BAM (Bodom After Midnight) didn't start. Absolutely cool guy. I am so sad about Alexi missing... I'll be continue to listen as hate crew member. Farewell.