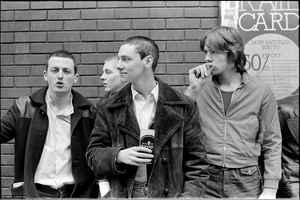 Profile:
Criminal Class was formed in Coventry, England in 1979, one of the first Oi!/Skinhead bands to emerge. The band made their debut on the compilation 'Strength Thru Oi!' in 1981 by 'Decca Records', which turned out to be a catastrophe for all the bands that appeared on the compilation due to violence that occured in Southall that same year. The following year the band released their only single, 'Fighting The System' in 1982 by 'Tempest Records'. Even though the band had slow tempo songs, their lyrics were very powerful. Had to do with corruption in England, the Falklands War, police brutality, black and white unity, and more. The band split up in the mid '80s and later reformed in 2000 after the release of the CD 'Blood on the Streets: The Criminal Class Oi! Collection' by Captain Oi!Records, recollecting tracks from the EP, 'Strength Thru Oi!', demos, and tracks that were never released.
(taken from skunxcomeback.blogspot)
Members:
Bernard Cunningham, Craig St. Leon, Danny Grear, Fred Waite, Jeremy 'Smurf' Edwards, Jim (85), John 'Septic' Taylor, John (205), Mark Branski