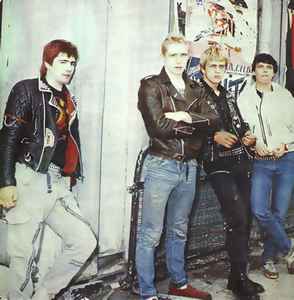 Profile:
English Punk / Oi band formed at the end of 1980 in London by Barry D'Amery and Lee Wilson. Renamed The Infas in 1983, the group released their second album under this name in January 1984, then gradually dissolved during the same year. They reformed in the summer of 1985 with a new drummer and gave a concert in November 1985, under the name of Infa-Riot, at the Adam & Eve club in Leeds. The group finally separated after this concert, before its reform in 2011.

Infa-Riot is an abbreviation of "In For A Riot"

June 1, 2021
There Were Called The Infas On There Second LP The Is Sound And Fury And It Was Released On Panache records
PANLP 501.

August 19, 2020
Not to be a picky boy but the bio isn't even close to true. "the group released their second album under this name in January 1984, then gradually dissolved during the same year," what second album exactly. No album on this page is from 1984. Would be great to understand this, if it's true was it like a rare release or something?