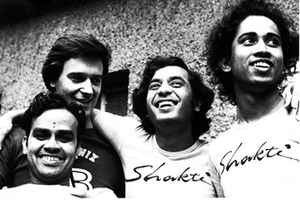 Real Name:
Shakti
Profile:
Shakti was a group which played a novel acoustic fusion music which combined Indian music with elements of jazz; it was perhaps the earliest practitioner of the musical genre world fusion.
Its leading member was the English guitar player John McLaughlin, but it also featured the Indian violin player L. Shankar. It also included Zakir Hussain (on tabla), and R. Raghavan (on the Mridangam) and T. H. "Vikku" Vinayakram (on Ghatam).
In addition to fusing Western and Indian music, Shakti also represented a fusion of the Hindustani and Carnatic music traditions, since Hussain is from the North, but the other Indian members are from the South.
It came together in 1975, after the dissolution of the second incarnation of Mahavishnu Orchestra, and toured fairly extensively during the period 1975-1977; it made only sporadic appearances (with personnel changes) thereafter.
After 1977 the albums which L. Shankar recorded with Z. Hussain and T. H. "Vikku" Vinayakram stayed close to the music made popular by Shakti. Some twenty years later McLaughlin and Hussain put together another band with the same concept, called Remember Shakti, including V. Selvaganesh (son of T. H. "Vikku" Vinayakram ), mandolin player U. Shrinivas and eventually Shankar Mahadevan.
Shakti means creative intelligence, beauty & power. (from wikipedia)
Sites:
Wikipedia
Members:
John McLaughlin, Ramnad Raghavan, Shankar, V. Selvaganesh, Vikku Vinayakram, Zakir Hussain
Variations:
Viewing All | Shakti (2)
Remember Shakti, Shakthi, Shakti & John McLaughlin, Shakti With John McLaughlin, シャクティ

February 19, 2021
Even by the admission of the biography text on this page (as of this writing), Shakti and Remember Shakti are not the same band - someone really wants them to be. Can someone with more time than me revert things back to how they really are?
Reply Notify me Helpful