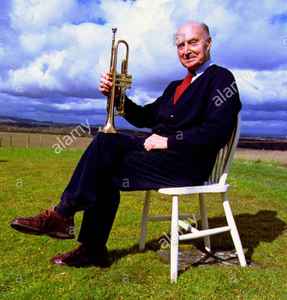 Profile:
British classical trumpeter and educator. Born 23 February 1913 in Manchester, England - Died 2 September 2002 in Alciston, East Sussex, England.
In 1932, aged only 19, he was appointed by Sir Thomas Beecham to the principal trumpet chair of the newly formed The London Philharmonic Orchestra. After the outbreak of Second World War, he and his brothers enlisted in The Band Of The Irish Guards. After the war, he became again LPO's principal trumpeter. He held this position until 1956, when he transferred to Walter Legge's Philharmonia Orchestra, from where, in 1963, he joined the BBC Symphony Orchestra as co-principal, staying until retirement in 1982. He was also professor of trumpet at the Royal College of Music, London from 1949 to 1982.
Brother of John Walton (6) and Bernard Walton (2).
Sites:
theguardian.com
In Groups:
BBC Symphony Orchestra, Philharmonia Orchestra, The Band Of The Irish Guards, The London Philharmonic Orchestra