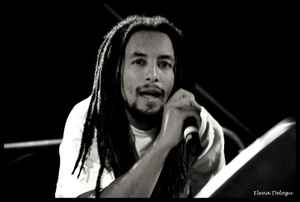 Real Name:
Raphael Nkereuwem
Profile:
Born in Savona (Italy) from Nigerian father and Italian mother, he starts his musical path still as a teenager by founding the Eazy Skankers reggae band in 2002. Through the years the ensemble collects important appearances on festivals and clubs with hundreds of live shows and two self-produced albums: “To the Foundation” recorded in 2008 in Jamaica at the legendary Tuff Gong Studio and “Changes” (2011) recorded and mixed by Madaski, leader and producer of the veteran Italian band Africa Unite. He delivers his first solo EP “My name is Raphael”, produced by Bizzarri Records, in 2012. The solo activity culminate with his debut album “Mind Vs Heart”, produced by the Austrian label IrieVibrations Records, issued on October 2013. The video of the first excerpt “Soundblaster” has today reached more than 500.000 views and the album received good feedback from both critics and audience. In 2014 the "Mind Vs Heart tour takes off" : more than 150 gigs in 15 different countries in Europe and South America. In 2015 Raphael toured all over Europe, with some prestigious opening acts like the one for Manu Chao, in front of 40.000 people in Monza Raceway, Italy. 2016 "Reggae Survival" album is released, produced by Sugar Cane Records (California), recorded in Italy, Jamaica and Mixed in the USA, featuring legends like Triston Palma and Dean Fraser. The videoclips for the singles "Dread inna Babylon" and "Joka Soundboy" were shot in Kingston and Port Antonio, Jamaica.
Sites:
mynameisraphael.com, Facebook
Aliases:
Raphael (4)
Variations:
Viewing All | Raphael Nkereuwem | Raphael
R. Nkereuwem