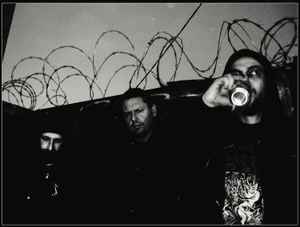 Perhaps few people were aware that Dominic Finbow, the legendary guitarist behind the gargantuan riffs and slime-ridden feedback of the UK's malefic doom icons MOSS, had relocated to Vancouver BC in recent years. Upon relocating to Canada and laying Moss to rest for good, Finbow set out to assemble a new circle of sociopaths in his new home with which to start over and bring new life into his hideous design of stomach-churning doom. The design was completed in the drenched months of 2008, when Nightfucker coagulated in the fetid, stagnant gutters above Vancouver’s filth-clotted stormdrains, as a reflection in primitive sludge/doom and as an exercise in the aural evisceration of the most unnameable inhumanity. The shadow was cast in the wake of the tormented legacies of forebearers Grief, Noothgrush, Eyehategod, Burning Witch, Corrupted, Goatsblood, Winter, Melvins, Leechmilk, etc., with Nick and Adam (of Vancouver’s scum cult Radioactive Vomit, Goatsblood, Deathwinds, and Ceremonial Bloodbath) rounding out the brand new power trio lineup to accomplish the wretched design. Nightfucker then etched a rotten demo titled Foul Omens onto a self-released cassette in 2010. To follow were many years of bitterness, disconnection, dissolution, malice, injury and self-abuse. In the bleak gleam of 2016 Nightfucker entered an alcoholic fog to expunge their final demons and ended up recording several more hymns of helpless aural atavism and utmost misanthropy that would end up being recorded with Braden DeCorby in the literal black confines of their seldom-used rehearsal dungeon. The atrocities birthed in the session closed a cycle of utmost dread and self-loathing which stood as the final tracklist of their debut self titled full-length LP released in 2019 by Sentient Ruin in the US and Rope Or Guillotine in Europe.
Members:
Adam Sorry, Dominic Finbow, Nick Hart (4)