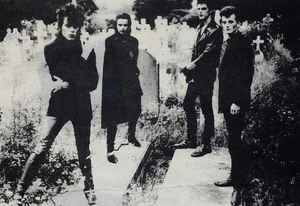 Profile:
Screaming Dead are a punk rock band from Cheltenham formed in 1980, who have often been characterized as "horror punk". They released several singles and EPs with indie chart success, before splitting up in 1985. They reformed in 1997, disbanded again in 1999, and reformed with three original members in 2014. This line-up toured the East Coast of the USA in 2018.
Sites:
Facebook, screamingdead.com, Bandcamp
Members:
Baz Clark, Hugh Fairlie, Mal Page, Mark Ogilvie, Nick Upton, Peter Maszlag, Sam Bignall, Terry Elcock, Tony McKormack
Variations:
Viewing All | Screaming Dead
SD, The Screaming Dead

May 5, 2016
They now have a 5 track ep available, primarily from gigs.
The Resurrection ep features 5 songs from their early days, all re-recorded, and is in a ltd ed of 100.
Absolutely brilliant if you can find it.
See 2 replies