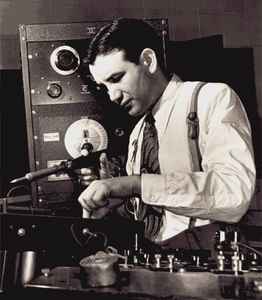 Composer, bandleader and inventor Raymond Scott was among the unheralded pioneers of contemporary experimental music.

Of all of Scott's accomplishments of 1949, however, none was more important than the Electronium, one of the first synthesizers ever created. An "instantaneous composing machine," the Electronium generated original music via random sequences of tones, rhythms, and timbres; Scott himself denied it was a prototype synthesizer — it had no keyboard — but as one of the first machines to create music by means of artificial intelligence, its importance in pointing the way towards the electonic compositions of the future is undeniable. His other inventions included the "Karloff," an early sampler capable of recreating sounds ranging from sizzling steaks to jungle drums; the Clavinox, a keyboard Theremin complete with an electronic sub-assembly designed by a then 23-year-old Robert Moog; and the Videola, which fused together a keyboard and a TV screen to aid in composing music for films and other moving images.

By the middle of the 1960s, Scott began turning increasingly away from recording and performing to focus on writing and inventing; a 1969 musical celebrating the centennial of Kentucky Bourbon was his last orchestral work, with his remaining years spent solely on electronic composition. Among his latter-day innovations was an early programmable polyphonic sequencer, which along with the Electronium later caught the attention of Motown chief Berry Gordy Jr., who in 1971 tapped Scott to head the label's electronic music research and development team. After retiring six years later, he continued writing — his last known piece, 1986's "Beautiful Little Butterfly," was created on MIDI technology.
Sites:
raymondscott.net, Facebook, Twitter, instagram.com, YouTube, Wikipedia, imdb.com
Aliases:
Bendix (5), Hugo Flint, Manhattan Research
In Groups:
Raymond Scott And His Orchestra, Raymond Scott And His Secret Seven, Raymond Scott And His Swinging Strings, Raymond Scott Quintet, The Captivators (2), The Instrumentalists, The Jingle Workshop, The Novelteers, The Raymond Scott Big Band
Variations:
Viewing All | Raymond Scott
R. Schott, R. Scott, R.Scott, Raymond, Scott, Scott, R., Scott-Green, The Swingin' Raymond Scott