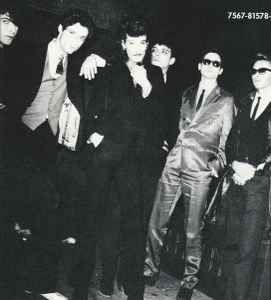 Profile:
US R&B/rock & roll band (1974-1986) fronted by Willy DeVille. Passed away August 6 2009 .Though starting out in San Francisco playing gay leatherbars as "Billy de Sade and the Marquis" (Billy being Billy Borsey, Willy DeVille's original name), the band changed its name To Mink DeVille (and Borsey became Willy DeVille) in 1975 and became one of the housebands in the famous NY club CBGB. CBGB was the epicenter of NY punk - and other house bands such as Blondie, Television and Talking Heads got Mink DeVille categorized as part of the punk/new Wave underground to which they never belonged musically. Mink DeVille's music was built on R&B, blues and 60's classic pop blended with streetwise attitudes and back alley romanticism, not unlike the sound heard in early Bruce Springsteen songs like "Rosalita" and "Tenth Avenue Freeze-Out" and heard from Springsteen confreres Southside Johnny & The Asbury Jukes and Gary U.S. Bonds, with a twist of hispano, New Orleans and Zydeco. Discovered by Capitol Records in 1977 the band recorded three albums for the label. The fresh approach to R&B classicism and rock & roll got producer legend Jack Nitzsche interested in producing the band and he is credited as being a major influence on the development of the band's sound. Hearing the band live in its early days also caught song writing legend Doc Pomus's attention, and he offered to write with Willy DeVille. In spite of critical acclaim and praise of DeVille's writing talent, Mink DeVille didn't make it big in the US, but caught quite an audience in Europe.

The original Mink Deville band was broken up by Willy DeVille after the first two albums, and from 1980's "Le Chat Bleu" recorded in Paris, he would hand-pick musicians for recording and touring under the band name. The album is often cited as the band's best out of the six studio albums.

From 1986 Willy DeVille performed under his own name.

seen LIVE gesehen by fargo7
New Wave 1976-1980 by M.Isaev
ARTISTS I SAW “LIVE" by tiopepe
Artists I've Seen " Live In Concert"... by Klaus_L
Watchlist by rockandroel
Artists I have seen live by JACOBSAJC
Artists for the Future by Milesbeet-hoven1
View More Lists →