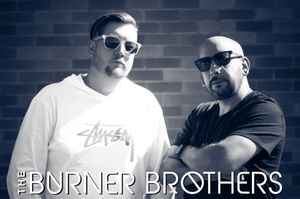 Real Name:
Alvaro Olle & Christopher Langrill
Profile:
The Burner Brothers is a name synonymous with drum and bass culture in the United States of America. Now comprised of founding members DJ Seen and CT Burners, the New York City based duo have already accomplished a tremendous amount during their career. Since their debut on the legendary Rawkus/Rawkuts imprint in 1999, they went on to release records for Jungle Sky, Subsonik Sound, and their own imprint Patrol The Skies. Their repertoire also includes international releases on Technique Recordings (UK), Formation (UK), Flex (UK), Nemesis (UK), Magic Vinyl (DE), and Steppasoundz (DE).

Aside from being accomplished producers, The Burner Brothers have also been crushing dance floors with their high-impact DJ sets for close to two decades. Starting with a residency at New York’s storied Direct Drive parties in the mid nineties, Seen and CT have gone on to perform all over the globe alongside the genre’s biggest acts. The guys have been honored to share the stage with some of their biggest influences including Andy C, Goldie, Roni Size, Pendulum, DJ Fresh, Fabio & Grooverider, Sigma, and Loadstar. Whether it’s a room of a hundred or a festival of a hundred thousand, the pair always bring the utmost energy and intensity to their sets.

Whilst CT Burners prefers to dwell in the shadows of the studio composing and handling music supervision for clients like The Academy Awards, Nike AT&T, and HBO, DJ Seen continues to be an ambassador of drum and bass culture, curating the online magazine www.dnbvault.com and moderating the hugely popular USDNB Hub. In early 2013 Seen decided to use his past experience managing Rawkus’ D&B imprint Rawkuts to start his own label, Patrol The Skies Music. Since its inception PTSM has changed the global perception of US drum & bass. The Burner Brothers head up the roll of A&R for PTSM and are proud to have helped incubate such talent as Noisefloor, Consouls, SIGNALFISTA, and HammerZz as well as rejuvenate others like PishPosh, Realtime, Glitch, and SST.

Looking toward the future, The Burner Brothers only have higher expectations for themselves both as producers and performers. With a heavy schedule of releases to support, Seen and CT anticipate a heavier touring schedule this year. The two are constantly reinventing the brand and refuse to conform to any specific trend or subset of the genre. To these guys, drum and bass isn’t just music, it’s a lifestyle.
Sites:
Facebook, Twitter, theburnerbrothers.com, SoundCloud
Aliases:
CT Burners, DJ Seen
Members:
Chris Thomas (4), DJ Seen, Keef Destefano
Variations:
Viewing All | The Burner Brothers
Burner Bros, Burner Bros., Burner Brothers, The Burner Bros, The Burner Bros.